Image of the Preacher’s Kid in Popular Culture

Three bikini-clad teens sip from red solo cups as they tan at the neighborhood pool. In the middle chaise lounge is Megan Cassidy, 17, one of the featured minister’s children in Lifetime’s series, “Preachers’ Daughters.”

“Did you go to youth Wednesday?” Megan’s friend asks.

“Hell no,” Megan says in her South Carolinian drawl. “I hate going to youth group. Mom and dad want me to go, but I just don’t like hanging out with those girls. They’re just judgin’ me, you know. Snitchin’ on me all the time. Can I get a cigarette?”

“Yeah, girl,” her friend says, as she reaches for the green cigarette box that is oddly brand-less. Black tape covers the label for the sake of the show. She hands her one.

Megan purses the cigarette between her lips and takes a drag.

“Megan the badass,” her friend says.

“Preachers’ Daughters” is the latest pop culture portrayal of children of religious leaders. From the original “Footloose” of the ‘80s to “7th Heaven,” the image of the preacher’s kid is as an extreme: either heavenly or hellion.

Characterization of PKs on the screen mirrors stereotypes attached to real children of the clergy. Reality for some preacher’s kids may fit the stereotypes perpetuated in popular culture, but for many, there is more to the story.

“Entertainment media isn’t about subtlety, it’s about audience and recognition. People are more comfortable with black and white than they are with gray,” said Diane Winston, the Knight Chair in Media and Religion at the Annenberg School for Communication and Journalism.

“I don’t think Americans really are taught to appreciate,

understand and intellectually grapple with religion.

So stereotypes become an easy way to grapple with it.”

Characterization of PKs on the screen mirrors stereotypes attached to real children of the clergy. Reality for some preacher’s kids may fit the stereotypes perpetuated in popular culture, but for many, there is more to the story.

In entertainment, religious people are considered stock figures just like heroes, heroines and villains, Winston said. Each type of character contributes to the story in a different way. Extreme characters hold the most appeal.

“There’s not a large spectrum for being a religious person in commercial media and also being a normal person. There have been a couple of attempts,” Winston said. “’Joan of Arcadia’ was a show that tried to depict a relatively normal young woman who came to a deep faith commitment, but was still deeply recognizable. That’s more the exception than the rule.”

Children of religious leaders are often foils in a plot to show rebellion or acceptance in ways the audience will either laugh at or criticize, Winston said.

“In a sense, preacher’s kids don’t have the ability to be normal kids because they’re burdened with all of the expectations or resentments that are projected onto their parents,” Winston said.

History of the Stereotype

“It is said preachers’ kids are the worst.

It must have been a preacher’s kid

Who said this first”

Prior to Martin Luther’s 95 theses that launched the protestant reformation in 1517, there were no married clergy. All priests were to be celibate. Protestant Christianity allowed for married ministers, which, of course, led to preacher’s kids.

While it is unclear where stereotypes about preacher’s kids started, there are different ideas about children of the clergy around the world. 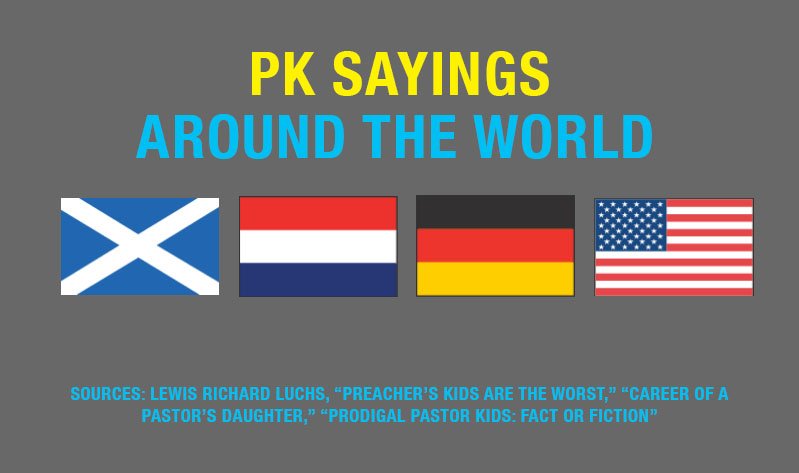 Are there similar situations in Islam, Hinduism and Judaism?

To read stories of children of religious leaders who requested anonymity, click here.

Several common themes came up in the interviews for the What’s It Really Like? section. To find stories pertaining to a specific situation, click on one of the themes below.

While many preacher’s kids strive to prove they are like their peers, findings from a 2002 study that surveyed 146 Georgia Baptist Convention pastors and 314 of their adult children called, “The Relationship Between Religiosity, Stress, Coping and Father Relationship Quality Among Adult Children of Ministers” found PKs face the same stressors as their peers, plus some. Sometimes the stereotype of being a PK itself causes people to act out.

A 2013 study, “Sinners or Saints? Preachers’ Kids and Risky Health Behaviors” examined the effects of religious and parental influences on adolescent decision-making. The study found PKs were less likely to engage in “risky” behavior: alcohol use, drug use, cigarette use, marijuana use and other drug use. Those that do, do it with no less intensity than their non-PK peers.

Jon Leighton started the Pastor’s Kid Network, a closed Facebook group for preacher’s kids, in Feb. 2014 as a part of his goal to create a network for PKs across the U.S. He said his parents were consumed with the ministry, and he often found himself “voluntold” to do it with them.

“Growing up as a PK, I realized that it took another PK to understand exactly what I was going through,” Leighton said. “Other kids just didn’t relate, and often they were the source of my problems.”

Whenever he met another preacher’s kid he always felt an instant connection, and he hopes to facilitate those connections for other PKs. Currently the group has over 100 members, and Leighton said they get new membership requests daily and are gaining support from pastors, too. The network has held PK retreats in the past, and Leighton hopes to grow the program more.

Future goals include a website with a literal network of PKs, so a PK could get a listing of other PKs in an area. The network is also developing small groups for intentional meetings. Within five years, Leighton hopes to have a worldwide gathering with thousands of PKs.

Different denominational groups also have resources available to children of the clergy. The Florida Conference of the United Methodist Church holds an annual clergy kids retreat and also has a Facebook group for its clergy kids and families to develop a community and support system for them.

“We just want to love on the clergy and give them a chance to breathe and enjoy time with their family,” said Joel Pancoast, program manager at Warren W. Willis United Methodist  Camp, noting the strains a career in ministry can place on a family. “I don’t know how many times the clergy have fun things at their church, but often they’re in charge of them. This is one of those weekends where it’s just for [them].”

PKs fourth grade and above have a separate schedule from the clergy families for the weekend. Each schedule has activities, worship and downtime built in.

Often others assume a PK will follow in the family business, and become a preacher just like his or her parent. In the “Preacher’s Kids are the Worst” study, Hijme Stoffels found most Dutch P.K.s  take job paths different from their clergy parents.